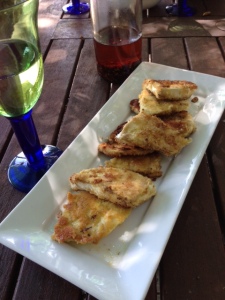 It was our second opportunity to taste a Puffball mushroom.  This one was a lot bigger than the previous one and after everyone had eaten we still had leftovers. The texture is marshmallowy or tofu like and is complimented well if fried in a crispy jacket of egg and unflavoured fresh bread crumbs ( Since I had fed all the bread that Mrs BYF had saved for the crumbs to the chickens she had to make do with foccacia crumbs, which were a trifle coarse). The flavour is very delicate, subtle mushroom and is easily lost by adding spices or other flavours. The breadcrumbs were considered salty enough so no salt was added. We used a bit of vegetable oil and butter as the frying medium.   Previously we made a frittata with a bit of uncooked mushroom, which was nice, but did not do the mushroom any favours. The texture was lost in that of the cooked egg and the flavour was hardly discernible. The piece of mushroom had also spent the night in the fridge and that may also have been a bad idea.

The spores of this mushroom could be dormant for 10 years and mushrooms only appear when conditions are perfect. Nobody knows what conditions are required, so we can only hope and keep an eye out for next Autumn.