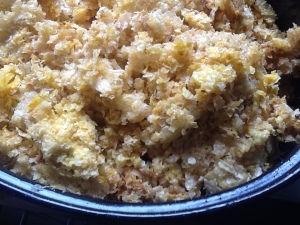 We have some honeycomb from which we had already removed the honey. I read up all I could about clarifying and extracting the wax and almost gave up trying. It all seemed too difficult, but was very easy after all. I tied the combs up in the top of a pair of pantyhose, put it in a pot of water placed over another pot of water to create a double boiler. I boiled the wax until the wax had melted and leaked out of the pantyhose leaving the crud and rubbish behind, easy to lift out and put in the bin.  After cooling overnight I had this beautiful yellow disk of beeswax floating on the water in the pot, ready for various projects from moisturiser cream, furniture polish to coating my cheeses. It smells so good, too.